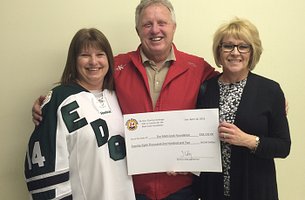 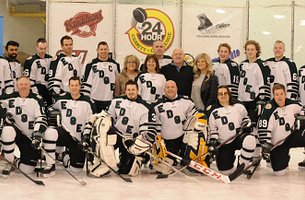 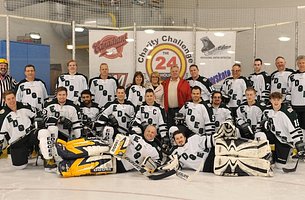 Matthew Cook was born in Edmonton, Alberta on November 10, 1987. Graduating from St. Francis Xavier High School in 2005, Matthew planned to study medicine.  In addition to being a very good student, he was a healthy, athletic young man with a passion for hockey. After high school, Matt played hockey with the Bonnyville Pontiacs Junior A Hockey Club until January 2006, when he was diagnosed with osteosarcoma, a rare type of cancer found most often in young people.

Matt’s treatments included 31 rounds of chemotherapy, a below knee amputation, and annual surgeries,  to remove metastasized cancer tumors from his lungs, and heart surgery to repair a blockage so that Matt could return to his passion of playing sports.

Throughout repeated medical challenges, Matt persevered.  He never quit setting personal goals.  Once his leg was amputated, Matthew was unable to achieve his first objective to play university and professional hockey.  Instead, he turned his attention to developing his sledge hockey skills.   He trained with conviction and soon after, in September 2008, Matt was successful in his efforts to earn a spot on Team Canada, the national men’s sledge hockey team.


After a winning season playing for Team Canada, the cancer spread again and in July 2009, Matt learned that the cancer would eventually take his life.  Yet, in spite of his terminal diagnosis, Matt persisted and again was named to Team Canada in fall 2009, and attended the Olympic Orientation Camp with aspirations to continue training to compete at the Vancouver 2010 Paralympics.  Though Matt never wavered in his personal fight against the disease, the osteosarcoma progressed quickly and Matt’s health began to decline.  He did not achieve his goal to play sledge hockey in the 2010 Paralympics.  Matthew Cook passed away in Edmonton on April 4, 2010.

In addition to being known as a determined hockey player, Matthew was committed to service to the community and to inspiring other people to achieve their dreams. He was a Certified Mentor for the Canadian Cancer Society, Certified Peer Visitor for the Canadian Coalition of Amputees and a Leader Trainer for the youth version of the Stanford Chronic Disease Self-Management Program.  He was Honorary Chair for the 2008 Edmonton Relay for Life and the 2009 inaugural Face Off Against Cancer tournament.   He volunteered at numerous events to promote sledge hockey and support programs like Soldier On and others. He was a member of the Alberta Amputee Sport and Recreation Association. Prior to his death, Matthew committed to one more goal, to establish a foundation that would raise awareness of the unique concerns associated with rare cancers.  Shortly after, The Matt Cook Charitable Foundation was established to continue Matt’s legacy in Canada.