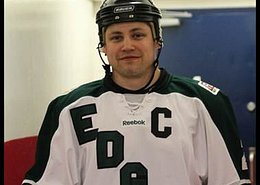 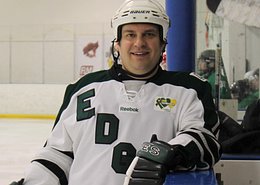 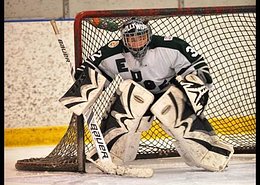 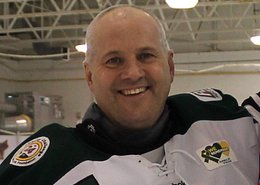 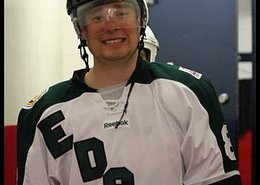 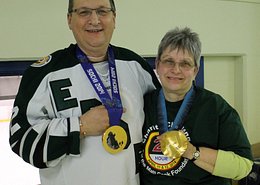 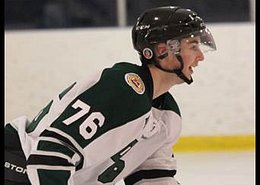 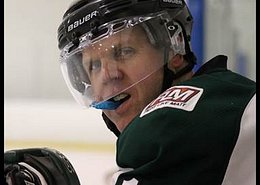 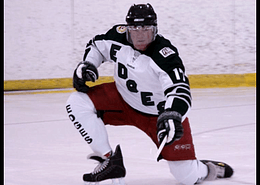 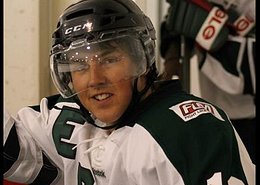 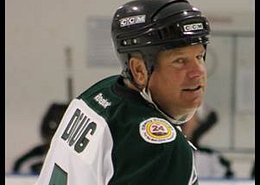 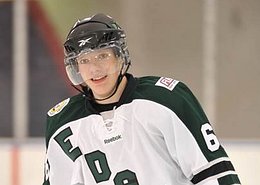 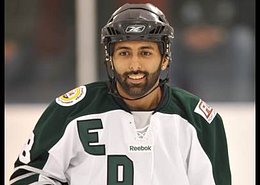 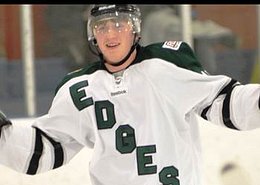 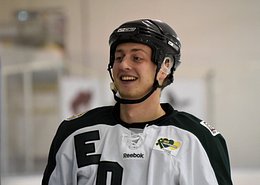 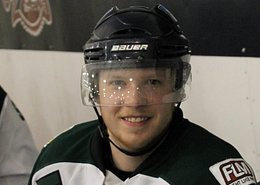 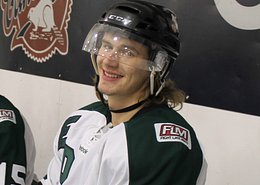 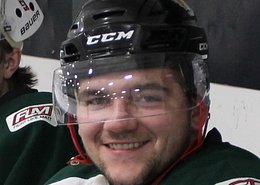 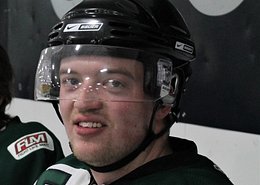 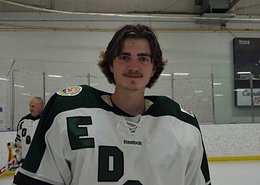 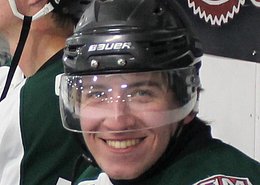 Austin has been involved in ALL of the 24-hr games, first as a player and in recent years as a coach.

Austin began playing hockey at the age of 6 in the Hawks Athletic Club initiation program and went on to play for CAC and currently the Beverly Warriors Jr B.  Many of his successes in hockey, he believes, are due to taking power skating with Edges.

Austin started taking power skating lessons from Tammy during his first year of Novice and started
helping coach at the age of 14. His school schedule has kept him away from the rink lately, but he still attends classes to this day and hopes to be around for many more years to come!

Shane has played in all of the 24-hour games, and this will be his 5th on the coaches team, achieveing iron man status in all of them.

Shane is working with Ledcor who, through The Ledcor Cares Program, is kindly matching all Ledcor employee donations.

Nick has been around Edges his whole life, and has been involved in the 24-hour game for every year, first as a player and more recently on the coaches team.

He started skating at age 2, playing at age 5, and hasn't stopped since, currently playing mens hockey.

In his time away from the rink, Nick is a student at the U of A, and enjoy many sports including golf, skiing, and running.

Kyle has been coaching with Edges for many years, although now his day job as an accountant is keeping him away from the rink with the exception of some subbing.

He started playing hockey at the age of 5 and was instructed by Edges for many years.  He continues to play men's league.

Kyle has earned several iron many awards in the past and we look forward to see him spotting in this year.

Rory has become one of our full-time coaches this year and a very familiar face to all of our skaters.  He has played on the coaches team for many years and achieved iron man status every time.

Rory has been skating with Edges for most of his playing career, and started coaching at age 15.  He played for the Hawks Athletic Club, Canadian Athletic Club, Northwest Zone and Junior for the Edmonton Mavericks.  He is now retired from competitive hockey and is focusing on power skating along with coaching rugby.

Aman is an alumni coach who helped out Edges for several years, along with coaching a variety of hockey teams.  He played in the 24-hr game for several years achieving Iron Man status for most of them.

Aman had an extremely positive and encouraging attitude on the ice, and was always a great contributer to the game.

Michael is one of the coaches you will regularly see on the ice these days and a long-time supporter of the 24-hr game with MANY iron man awards.

He began playing hockey at the age of 4 in the Hawks initiation program and remained with the Hawks organization through bantam, then moving to the NWZ and CAC.  In junior, he played with the Chase Heat in the KIJHL (Junior B in BC) and the English River Miners in the SIJHL (Junior A in Ontario). He attributes his success in his junior career to the power skating instruction he received over the many years with Edges.

Michael started taking lessons from Edges in his second year of novice and then became an Edges coach at the age of 15.  We are definitely happy to have him coaching full-time!.

Doug is a Superskate board member and an alumni of the game. He enjoys giving back to a sport that has given him many fond memories over the years.

Born and raised in Montreal, Doug starting playing hockey at age 5. He played all the years through to college, where he played at AAA Collegiate Division at Dawson College. He moved to Edmonton in 1991, and has been involved with Edges for many years now.

Away from the rink, he is a commercial lines insurance broker and his favourite pastime is golfing.

Bryce is another more senior coach with Edges.  He has always been one of the favourite young  instructors, but in recent years, work has taken him out of town making his coaching time limited.

Bryce has been playing hockey for 20+ years and is currently playing men’s hockey.

He is married to Bella, and in his spare time, he enjoys going to the cabin for wakeboarding and has his journeyman iron worker ticket.

Brock is a Red Seal Journeyman Carpenter who is self employed framing and building custom homes. These last couple years have kept him away from the rink, but he has been coaching power skating for many years and really enjoys seeing the kids improve.

Brock has been playing hockey since he was 5 and still enjoys playing. He has coached minor hockey at the initiation thru Midget AAA levels, and has enjoyed some greatest coaching experiences including with Hockey Alberta.

Brock, along with hockey, has Softball coaching certification and enjoys the outdoor sports too!

Rick is one of the more "experienced" coaches who has been around for a long time and one of our past “Iron Man” players.  Unfortunately a ruptured achilles tendon injury several years ago sidelined him from playing the entire 24 hours but he still joins the crew to help out.

Rick started playing hockey when he was 5 and has been playing ever since, currently playing men’s hockey.  Over the years, he has coached minor hockey at a variety of age groups.

Away from the rink, Rick is an engineering technologist.  He enjoys spending time with wife Sandi and two children, Teryn (25) and Nicholas (23).

Joey is another alumni coach who was part of the original group to start the 24-hour game.  He was an iron man for many years.

He started playing hockey at the initiation level and took his first power skating lessons with Tammy during his first year of novice. After playing bantam, Joey made a major change and started officiating hockey.  He currently officiates regularly at the Junior, Senior, and College levels.  He is a mechanical engineer as his day job.

Ken is one of the more “senior” coaches with Edges.  His involvement is generally in an advisory role as well as coach mentorship, but his "experience" is extremely valuable to the program.

He has played hockey up to the Junior B level, playing in the first year the league started in the 1970’s.

Ken has extensive past experience coaching and managing hockey teams from the pre-novice to bantam levels.  He has two sons, Brad and Grant, who have also been involved with Edges, and now four grandchildren.  He and wife Judy have been key members of the 24-hour game organizing committee over the years, and the games wouldn't happen withour their contributions.

Tyson, another senior coach, has been scarce around the rink this year as his other careers are taking up his time.  He started playing hockey when he was 13, and then at 15 started playing competitively.  He played low levels of hockey until he took power skating with Edges, and then after that became a top tier player.   He still plays men’s league, and enjoys hitting up the outdoor rink a few times a month.

Tyson received his Journeyman Ironworking certificate in November of 2010, and is currently busy as a real estate agent.

Randy has stepped up at various times throughout the years to help with Edges camps.  He is doing so again by strapping on the pads and playing in goal for this 24-hour game.  He is the ultimate “Iron Man” when it comes to these 24-hour games.

He started playing hockey at a very young age, and still plays, especially at his own rink out in the country where family and friends flock for some good old fashioned pond hockey.  He has also coached minor hockey for a variety of age groups throughout the years.

Away from the rink, Randy is a journeyman electrician and retired from a long career at ATCO.  His wife Brenda, son Jon and daughter-in-law Melissa all support him in his 24-hr game committment.

Grant is another alumni of the game.  He has been playing hockey since the age of 5. Grant took a different direction with his hockey career and, at a young age, strapped on the pads to tend goal. He played club hockey with the Maple Leaf Athletic Club and junior hockey with his brother, Brad, for the Edmonton Firebirds.

Grant’s coaching career started with Learn to Skate groups at the age of 13, and he has been at it ever since. He has coached a variety of levels including Female Midget AAA, Female Bantam AAA, and he has extensive involvement with hockey development including Hockey Alberta’s Future Leader Program, U16, and the Alberta Winter Games.

Grant has degrees in both Physical Education and Education from the U of A. He is currently teaching at Clover Bar Junior High School both in the classroom and with the hockey program.  He and Erin have two children:  Piper age 3 and Gavin age 1.

Brad is one of our most senior coaches, and an alumni of the game.  He was an Iron Man Player every single year prior to COVID.  He started skating when he was three, playing hockey at 5, and has been involved ever since.

As a lifetime student of Edges himself, he started coaching at age 14 and has been around for some 20+ years.  He has also coached minor hockey at various levels.

Away from the rink, Brad is a computer geek.  He is married to Andrea, has a 6 yr old daughter Claire, and a 1 yr old son Alex. Brad also enjoys golfing and going to the lake.

Brad has retired from his on-ice 24-hr games but supports the game in the background.

Ryan is the captain of this group of misfits, and a face you will see more at spring and summer camps.

Ryan started playing hockey at age 7 and has been playing ever since.  He is a former student of Edges, began teaching power skating at the age of 15 and has been coaching for the last 20+ years (yes that makes him old).  He has also coached a variety of teams throughout the years..

Away from the rink Ryan and his wife Wanda are kept busy with their three children, Shelby 11, Mason 10 and Payton 7.  Ryan is enjoying his career as a firefighter with the City of Edmonton, and we at Edges are enjoying it too as it makes him more available to come out to teach!!

Ryan has been a recipient of the "Iron Man Award" for playing the entire 24 hours every year so far and hopes to make this year number eleven!